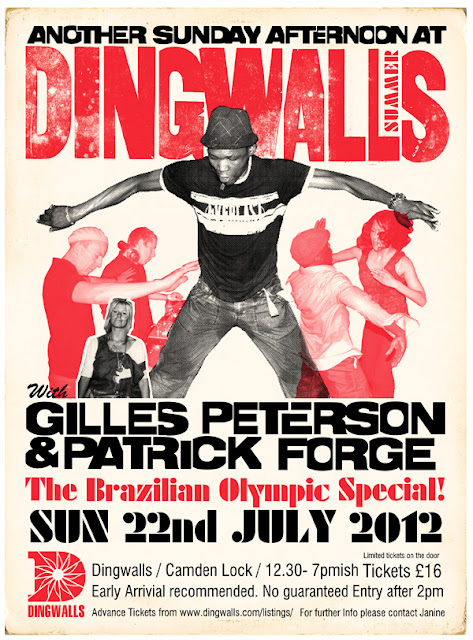 This year we have a Dingwalls Olympic Special happening! And for those of you who don't know my missus janine has been involved pretty much from the start. here she maps out the post Dingwalls history .

The 80's were an exciting time for me. There was no "scene" as such but the seedlings of one which were beginning to sprout with the likes of the Electric Ballroom, The Wag, Special Branch, the Belvedere Arms in Richmond, K Jazz pirate radio and Jazz Bops. This was a fledgling scene and the start of a musical love affair that I would have for the next 30 years and am still having.

Being musically inept, plus having the memory of a gnat, I needed to find my niche for this love of mine. It was not enough just being there, I had to be a part of it. So realising that my best asset was my fog like vocal skills! (deaf people have said they can hear me!) and my reasonable people/organisational abilities, I started flyering my most favourite sessions (whether it was wanted or not)! Strangely although there were flyers around they were usually displayed at the front of venues for people to collect on their way out, and very rarely were they "flyered" at other events, so it was a fairly lonely job, but it was my only religion and I was preaching what I believed.

In the beginning there was Dingwalls, and considering its legendary status & the scene it spawned, ridiculously only truly existed for 4 1/2 years. What came after was actually what cemented its iconic status.

We did carry "Dingwalls" on for a short time in Camden at a venue called the Underworld, but whether it was just too soon for us all to get over our beloved Dingwalls or the fact that the space was so strangely configured, it just never really gelled.

While we were Dingwalling, another club on a Thursday called Babyelon at Heaven, Charing Cross was trying to join a few musical dots and in one of the dark caves, Gilles and Patrick joined forces for the first time. Another important element that was to feature at Dingwalls very soon.

During "the Dingwall time" there were other smaller weekly/monthly happenings, the most significant being The Fez in Paddington, where Patrick Forge, Kevin Beadle and Gilles Peterson dj'd a more soulful, funky set. A mad little club at the bottom of a huge hotel, where the likes of Paul Weller would hang out.

Another was Jazz 90 which we started towards the end of Dingwalls and was a little spin-off for all the jazz dancers. Gilles along with a DJ called Sylvester started up these monthly's at slightly out of the way venues. The Emerald Centre on Hammersmith roundabout, Torren Street behind Angel Islington and even the Pullitt Building in Camden - an old warehouse building on the canal, where interestingly we also held a Dingwall reunion & created Dingwall membership cards.

Because of the success of Dingwalls and Gilles' record label Talkin' Loud and Saying Somethin', around 1991, The Fridge in Brixton came a calling. This was a huge step up for us coming from a small venued, niche intimate crowd to an over 1000 person capacity cavernous venue, in an area that none of us were really familiar with. This was where we almost turned into a professional set-up. For the first time we had a budget for bands, DJ's, visuals & flyers. This was an important time for all these amateur elements that we had, to become more professional. Flyering was a classic example, I'd always done this by myself, now I was able get a posse of like minded girls who were really the first proper London leaflet team, predating the likes of "flying Squad" and "Don't Panic". My girls were clubbers and they were good.

We spent about 2 years at the Fridge, starting on a Saturday and moving finally onto a Friday. It cemented our sound, our DJ's, was one of the first club nights to introduce personalised all night slide show visuals (created by Swifty -Talkin' Loud and Straight No Chaser fame) and gave us a much wider audience. In our last Summer there, which we reclassified as Talkin' Summer we installed a young resident DJ called James "Holygoof" Lavelle, latterly known as James Lavelle of Mo'Wax, Man from Uncle fame.

So around 1993/4 a friend of ours Chris Greenwood asked Gilles if he might be interested in taking on a more intimate space in the heart of the West End, Gilles asked James Lavelle if he would like to join him. That's How it Is! 12 1/2 years at Barumba. Interestingly THIS! was as far away musically as you can get from the original Dingwalls but it instilled that same passionate intensity and like Dingwalls inspired its audience to take up the musical reigns. Very few clubs sessions have created more DJ's, musicians, producers, record labels, presenters, graphic designers, promotors, Artists etc. than the Dingwall to Barumba Road.

THE RETURN OF FUSE!

Way back at the start of my career - bloody way back the 80's ! I was lucky enough to work for the don gorgon of the day - Mr Neville Brody. He had hooked up with another Don - Mr Erik Spiekermann and together they hatched a plan, which became the publication FUSE. I was working on some pretty weird and  wonderful fonts in a piece of software called 'Fontastic' which was a bitmap font editor - you could only plot squares (this was before Fontographer) or at least version one of Fontographer - which from what I remember was a bitch to use and was pretty much unusable! All the fonts I designed have long since gone - all backed up on Floppy disks and retired to the scrap heap (see an earlier blog entitled 'Digital Nightmares') Anyhow push comes to shuv and Neville and erik both liked these experiments and I was asked to contribute to FUSE 1 along with Neville (of course) Malcom Garrett and Phil Baines. I was seriously out of my depth, but to this day incredibly honored to have been in such legendary company. The Fuse publication went on for another 18 issues with two planned that never came out due to  the demise of the floppy disc!

Over twenty years on Taschen are about to publish FUSE 1-20 packaged in the iconic cardboard box with all 20 posters , 416 pages and online font library £34.99
more info
http://www.taschen.com/pages/en/catalogue/design/all/06768/facts.fuse_120.htm

The VW Campervan myself and Stash had customized in 95 was well and truly smashed! After a few minor crashes and mishaps it looked terrible. So it was time for a new paint job ! We enlisted the services of one Mode 2 who I think just happened to be in the area. We couldn't use the car park of Studio Babylon  as it was way too busy, so we decided to do it at my house in leafy suburb of West London. Mode set to in the afternoon sometime, we where ok it wasn't raining! One of the neighbors complained "don't get bloody spraypaint on my car !) we had to move it. We worked into the night and the new van complete with "Ice Flames" was ready. I think the van was used for a few years, and then I remember Tullyman ringing me a telling me they where gonna flog it as it was always braking down and just became to unpractical , don't know where it ended up. 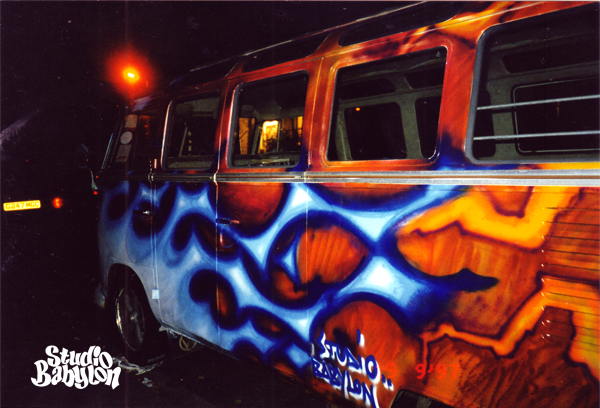 I'm going back a bit now ! well before my days as a Jazzer or acid jazzer - well lets say it i lived up North and very proud of it too! In the heady days of the early 80's aged 15 onwards or world was all about the music and people we experienced right there on our doorstep. Yes we are talkin' Factory records, The Hacienda and Berlin Nightclubs, checking Pete Burns at Probe records and buying our gears at 69A clothing shop as well as the early copies of i-D. I saw my old mate Dave Standley the other day and he evidently has a slighty better memory than me ! Not difficult - know what I mean - nudge nudge say no more - or just getting old. Anyway cutting to the chase I mentioned a gig we went to at Deeside Leisure centre to see NEW ORDER! But I couldn't remember the name of the gig or even the rest of the line up! Well dave enlightened me  - they put thick rubber mats on top of the ice rink (which we where standing on !) and built a stage - It must have been the Saturday we went, and saw all the bands - waiting for the big event NEW ORDER - they eventually came on later than expected and according to Dave we saw them perform TEMPTATION and a couple of other tunes before Dave's Dad arrived to take us home.