Not long after we'd moved into unit 65 Pall Mall Deposit I started these pieces entitled 'Digital Nightmares'. It was a gut reaction to the continued problems we were having with digital technology in general and in some ways almost an emotional cry for help ! Back in Coronet St from 1989 onwards we'd stored all our data on 3.5 inch floppy disks. Well before photoshop and scanning you could literally fit a complete magazine and several record sleeves designs in 1.4 megs of data! yes true. I had a plastic box full of the things, even font disks, back up disks, software everything came on a floppy! After a year or two after one fate full day popping the floppy in the drive waiting for it it to mount onto the desktop and hey presto - nothing ! yes it turns out floppy's only have a life span of about 2 years. Consequently I had tons of these things with much valued back up on - as good as ready for the bin! As the technology got better and the advent of Photoshop and scanners (about '93/'94) jobs where sent off on 44mb and 88mb Syquest Disks. Again we used them as back up and again realized some time later that they too had a limited life span and they cost a bloody fortune. My frustration with all this led me to do these pieces - now I wouldn't really call them 'Art' but in a funny kinda way looking back they are. Moving swiftly to 2011-  maybe my next pieces will feature Lacie Hard drives as I've had two of 'em collapse on me in the last year ! my complete back up for the year 2006 completely gone - The Digital nightmares continue!

As part of the fosters Ice 'Street Art' campaign we secured NYC legend Futura 2000 to paint his billboard live at the event. At the time live painting was unheard of apart from Graffiti jams and again the concept broke new ground in the advertising world and the brand community.  Along with this event and his frequent work for Mo' Wax the interest in Futura's style and work went ballistic in the UK! 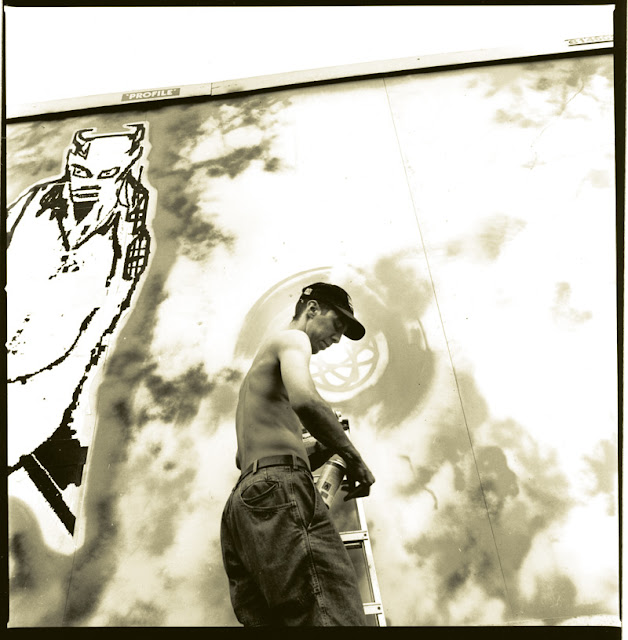 Early 1995 my missus Janine met and old friend she knew from Dingwalls and the Soul weekenders by the name of Jon Wilkins (he now is one of the founders of Naked Comms!) funnily enough in a supermarket. He knew of me (Swifty) and mentioned that the ad company he worked (BMP) had some spare cash from the Fosters Courage account and wanted to do something more edgy with it and mentioned the idea of 'Graffiti' on billboards. Push comes to shove and he visits my studio then in Coronet St, Hoxton sq with his collegue Rupert Newton and we hatch the plan ! I came up with the concept 'Street Art' as Graffiti at that time was a very dirty word in Advertising circles and we also wanted to have spray can art as the basis but also wanted the boards to be done by a range of creators from musicians to graphic designers , photographers and illustrators. Now its never been looked into but I'm 100% the word 'Street Art' had never been used in print prior to that date and this campaign broke new ground and received worldwide recognition for narrowing the gap between Graffiti and brand culture. It was radical stuff we booked 10 billboards along Kentish Town Rd from the camden lock market up to Chalk farm tube station and I set to commissioning a range of art to go on them. With the help of Paul Tully (who now runs PD3) we hired a space called the 'Arts Depot' behind St Pancras station an old victorian gym with brilliant vaulted high ceilings to do paint the art and hold the party to launch the event .